Product Presentation and Marketing at Another Scale

New Innovations of Oculus and Microsoft

The Oculus Quest and the Oculus Rift S are promising an exciting future for VR-based technology, due to their improved functionalities that open up new avenues for virtual reality to shape the way in which we interact and communicate in a work environment. 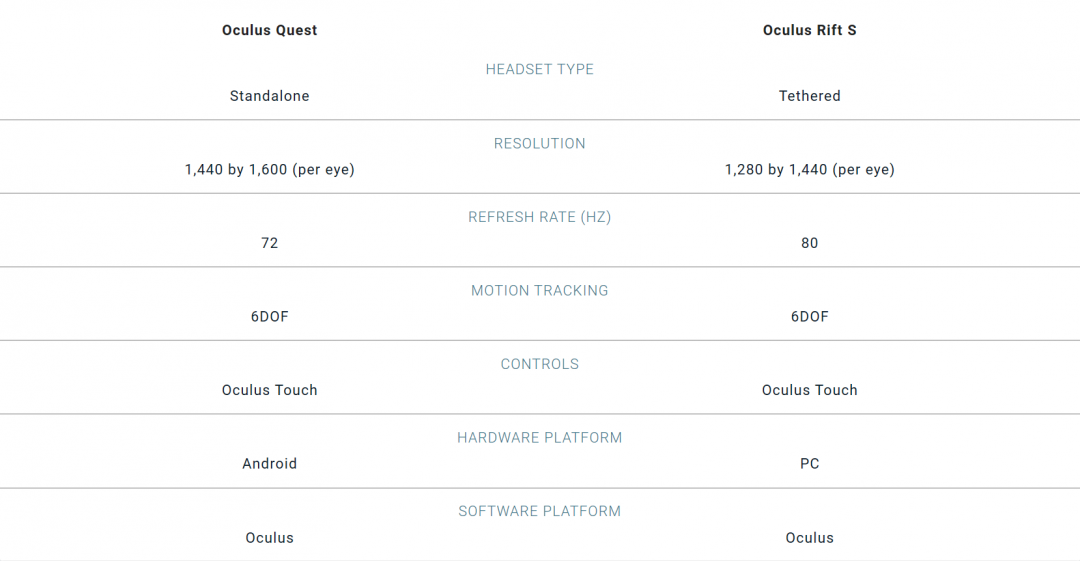 With the Quest, Oculus decided to focus on accessibility and ease of use by integrating the motion tracking sensors into the headset itself.

This technology –termed Oculus Insight – affords the user greater freedom to move around without having to connect the device to external sensors or a computer.

Therefore, the Quest is entirely self-contained, meaning that it can be used at home or at work, as well as on the go.

As Mark Zuckerberg outlined during his talk at the Oculus Connect 5 presentation, with the Quest “there are no wires that are going to break your feeling of presence.”

It also features an OLED display with a total resolution of 2880×1600 which ensures an immersive, high-definition experience.

Additionally, the Quest utilizes the same Touch controllers as the Rift S which makes it easier to develop applications for both systems simultaneously due to the shared control scheme.

It’s biggest asset, however, lies in its portability and the associated ease of use. Being able to experience VR on an independent system regardless of physical location is a big step towards a future in which VR is readily available for personal and professional use.

The Oculus Rift S improves on its predecessor – the Oculus Rift – with advanced technical specs in many different areas. Also utilizing the Oculus Insight tracking technology, the Rift S manages all the motion tracking internally, similar to the Quest.

The need for external sensors to be setup in the user environment is therefore removed.

Since the Rift S is still connected to a PC however, it supports more complex VR applications by virtue of not being limited to its internal technology, but rather relying on more powerful PC hardware.

This allows the Rift S to fully capitalize on its LCD display with a resolution of 2560×1440, around a 20% increase compared to the Rift.

Furthermore, the Rift S features positional audio, as well as a microphone, built directly into the headset, allowing for seamless communication between numerous people in a multiplayer environment.

In terms of wearing comfort, the size of the Rift S headband is adjustable via a fit wheel at the back of the device, making it easily adaptable to the user’s head size.

Microsoft also contributes to the technological progress in the fields of VR and AR.

With their HoloLens 2 being available for preorder in the USA, France, Germany, Ireland, New Zealand, Australia and Great Britain, Microsoft is aiming to iterate on the design of the first HoloLens.

The new model will, among other things, feature an increased field of view and a vastly improved resolution.

“To put it in perspective and to highlight the generational leap, this is the equivalent of moving from a 720p television to a 2K television on each of your eyes” – Alex Kipman, Technical Fellow for AI and mixed reality at Microsoft

Furthermore, the added eye tracking functionality – in combination with the already-established hand recognition – allows for new and intuitive ways of controlling Augmented and mixed reality applications with the HoloLens 2.

An example of an application area for these features is the ability to scroll through a document by simply looking at the bottom of the screen or to directly interact with holograms, moving them around, resizing them, as demonstrated by Microsoft during their HoloLens 2 keynote.

The new device also features a dial-in fit system to comfortably adjust the size of the headband, as well as the option to flip the visor up when work requires different tasks outside of mixed reality.

With Oculus focusing on continually improving their VR devices and Microsoft combining VR and AR into a mixed reality approach with their HoloLens 2, the future of VR and AR is promising to be exciting.